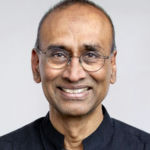 Why Is Venki Ramakrishnan Influential?

Venkatraman Ramakrishnan is president of the Royal Society, and a group leader at the Medical Research Council Laboratory of Molecular Biology for the Cambridge Biomedical Campus. He earned a bachelor’s degree in physics from the University of Baroda and a Ph.D. in physics from Ohio University. He then studied biology at the University of California at San Diego, part of his journey from physics to biology. He went on to research as a postdoctoral fellow at Yale University, where he began his study of ribosomes.

His work on ribosomes has provided structural insights into the atomic structure of the ribosome, using cryogenic electron microscopy to discover new structures. His laboratory has also worked on histone and chromatin structures.

Ramakrishnan has received the Louis-Jeantet Prize for Medicine and the Datta Lectureship and Medal for the Federation of European Biochemical Societies. In 2009, he and his colleagues Thomas A. Steitz and Ada Yonath were awarded the Nobel Prize in Chemistry. In 2010, he was honored with India’s second highest civilian honor, the Padma Vibhushan, and in 2012 he was knighted during the 2012 New Year Honours. He is a Fellow of the Royal Society and a Member of the U.S. National Academy of Sciences.

According to Wikipedia, Venkatraman Ramakrishnan is an Indian-born British and American structural biologist who shared the 2009 Nobel Prize in Chemistry with Thomas A. Steitz and Ada Yonath, "for studies of the structure and function of the ribosome".

Other Resources About Venki Ramakrishnan

What Schools Are Affiliated With Venki Ramakrishnan?

Venki Ramakrishnan is affiliated with the following schools: