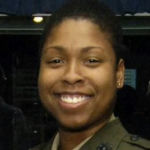 Why Is Vernice Armour Influential?

According to Wikipedia, Vernice "Flygirl" Armour is a former United States Marine Corps officer who was the first African-American female naval aviator in the Marine Corps and the Marine Corps first female combat aviator. She flew the AH-1W SuperCobra attack helicopter in the 2003 invasion of Iraq and eventually served two tours in support of Operation Iraqi Freedom.

Other Resources About Vernice Armour

What Schools Are Affiliated With Vernice Armour?

Vernice Armour is affiliated with the following schools: