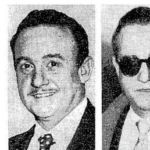 Why Is Victor Riesel Influential?

According to Wikipedia, Victor Riesel was an American newspaper journalist and columnist who specialized in news related to labor unions. At the height of his career, his column on labor union issues was syndicated to 356 newspapers in the United States. In an incident which made national headlines for almost a year, a gangster threw sulfuric acid in his face on a public street in New York City on April 5, 1956, causing his permanent blindness.

Other Resources About Victor Riesel

What Schools Are Affiliated With Victor Riesel?

Victor Riesel is affiliated with the following schools: