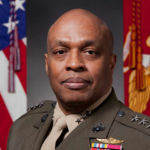 Why Is Vincent Stewart Influential?

According to Wikipedia, Vincent Raymond Stewart is a retired Jamaican American lieutenant general in the United States Marine Corps who most recently served as Deputy Commander at United States Cyber Command. He previously served as the 20th Director of the Defense Intelligence Agency . LtGen Stewart, who held that post from January 23, 2015 through October 3, 2017, was the first African American, first Jamaican American and first Marine to hold the position of Director of the DIA.

Other Resources About Vincent Stewart

What Schools Are Affiliated With Vincent Stewart?

Vincent Stewart is affiliated with the following schools: