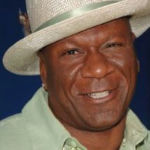 Why Is Ving Rhames Influential?

According to Wikipedia, Irving Rameses "Ving" Rhames is an American actor. He is best known for his supporting roles as IMF Agent Luther Stickell in the Mission: Impossible film series and gang kingpin Marsellus Wallace in Pulp Fiction. He also appeared in Jacob's Ladder , Dave , Striptease , Con Air , Only in America , Out of Sight , Entrapment , Bringing Out the Dead , and Dawn of the Dead . He voiced Cobra Bubbles in the animated films Lilo & Stitch , Stitch! The Movie , and Leroy & Stitch .

Other Resources About Ving Rhames

What Schools Are Affiliated With Ving Rhames?

Ving Rhames is affiliated with the following schools: