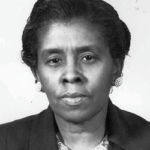 Why Is Violet Hill Whyte Influential?

According to Wikipedia, Violet Hill Whyte was a teacher, the first African-American to be appointed an officer of the Baltimore Police Department in Maryland, and a community activist. She was appointed in December 1937 by Commissioner William P. Lawson, and served for 30 years, reaching the rank of lieutenant. In addition, she participated on numerous community boards and commissions, working to improve the lives of women and children especially in Baltimore.

Other Resources About Violet Hill Whyte

What Schools Are Affiliated With Violet Hill Whyte?

Violet Hill Whyte is affiliated with the following schools: