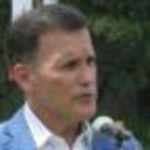 Why Is Wade Burleson Influential?

According to Wikipedia, Wade Burleson is a politician, author, avocational historian, and retired pastor for Emmanuel Enid church in Enid, Oklahoma, United States. Burleson was twice elected President of the Baptist General Convention of Oklahoma, serving between 2002 and 2004. He later served as a trustee for the Southern Baptist Convention's International Mission Board from 2005 to 2008. Oklahoma Governor Frank Keating appointed Burleson to the northwest Oklahoma Higher Education Program Board in 1996.

Other Resources About Wade Burleson

What Schools Are Affiliated With Wade Burleson?

Wade Burleson is affiliated with the following schools: