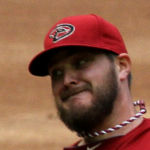 Why Is Wade Miley Influential?

According to Wikipedia, Wade Allen Miley is an American professional baseball pitcher for the Chicago Cubs of Major League Baseball . The Arizona Diamondbacks selected Miley in the first round of the 2008 MLB draft. He made his MLB debut with the Diamondbacks in 2011, and has also played for the Boston Red Sox, Seattle Mariners, Baltimore Orioles, Milwaukee Brewers, Houston Astros, and Cincinnati Reds. He played college baseball at Southeastern Louisiana University. On May 7, 2021, he threw a no-hitter against the Cleveland Indians.

Other Resources About Wade Miley

What Schools Are Affiliated With Wade Miley?

Wade Miley is affiliated with the following schools: