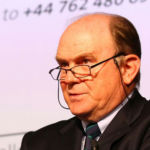 Why Is Walter Kielholz Influential?

According to Wikipedia, Walter Bruno Kielholz was chairman of the Board of Directors and former CEO of Swiss Re. Kielholz completed a degree in business administration at the University of St. Gallen, Switzerland, in 1976. From 1997 to 2002 he was CEO of Swiss Re; He was Swiss Re's Chairman from 2009 to 2021.

Other Resources About Walter Kielholz

What Schools Are Affiliated With Walter Kielholz?

Walter Kielholz is affiliated with the following schools: