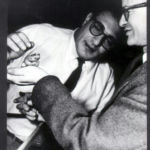 Why Is Walter Pitts Influential?

According to Wikipedia, Walter Harry Pitts, Jr. was a logician who worked in the field of computational neuroscience. He proposed landmark theoretical formulations of neural activity and generative processes that influenced diverse fields such as cognitive sciences and psychology, philosophy, neurosciences, computer science, artificial neural networks, cybernetics and artificial intelligence, together with what has come to be known as the generative sciences. He is best remembered for having written along with Warren McCulloch, a seminal paper in scientific history, titled "A Logical Calculus of Ideas Immanent in Nervous Activity" . This paper proposed the first mathematical model of a neural network. The unit of this model, a simple formalized neuron, is still the standard of reference in the field of neural networks. It is often called a McCulloch–Pitts neuron. Prior to that paper, he formalized his ideas regarding the fundamental steps to building a Turing machine in "The Bulletin of Mathematical Biophysics" in an essay titled "Some observations on the simple neuron circuit".

Other Resources About Walter Pitts