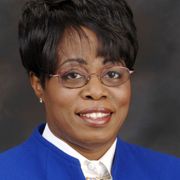 Wanda M. Austin is a former president and CEO of The Aerospace Corporation, a leading architect for the nation’s national security space programs. She was both the first woman, and the first African-American, to hold this position. The Aerospace Corporation has nearly 3,600 employees and annual revenues of more than $917 million. Austin assumed this position on January 1, 2008, and retired on October 1, 2016. She continues as a consultant for the corporation.