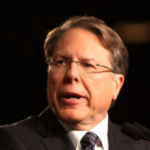 Why Is Wayne LaPierre Influential?

According to Wikipedia, Wayne Robert LaPierre, Jr. is an American gun rights lobbyist and CEO and Executive Vice President of the National Rifle Association , a position he has held since 1991. Early life Wayne Robert LaPierre, Jr. was born on November 8, 1949, in Schenectady, New York, the eldest child of Hazel and Wayne Robert LaPierre, Sr. His father was an accountant for the local General Electric plant. The LaPierre family trace their patrilineal heritage to a 17th century French ancestor who emigrated from the Brittany region of France to New France . His family moved to Roanoke, Virginia, when LaPierre, Jr. was five years old, and he was raised in the Roman Catholic church.

Other Resources About Wayne LaPierre

What Schools Are Affiliated With Wayne LaPierre?

Wayne LaPierre is affiliated with the following schools: