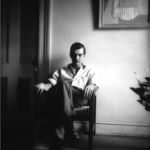 Why Is Weldon Kees Influential?

According to Wikipedia, Harry Weldon Kees was an American poet, painter, literary critic, novelist, playwright, jazz pianist, short story writer, and filmmaker. Despite his brief career, Kees is considered an important mid-twentieth-century poet of the same generation as John Berryman, Elizabeth Bishop, and Robert Lowell. His work has been immensely influential on subsequent generations of poets writing in English and other languages and his collected poems have been included in many anthologies. Harold Bloom lists the publication of Kees's first book The Last Man as an important event in the chronology of his textbook Modern American Poetry as well as a book worthy of his Western Canon.

Other Resources About Weldon Kees

What Schools Are Affiliated With Weldon Kees?

Weldon Kees is affiliated with the following schools: