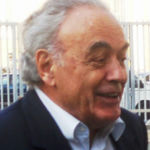 Why Is Werner Arber Influential?

He was among the first to work in the University of Basel’s new interdisciplinary research center, the Biozentrum. His work on restriction endonucleases (and arguably his experience working with Daisy Roulland-Dussoix, a PhD student) led to a shared Nobel Prize in Physiology or Medicine.

Arber has been generous with his time, sharing his expertise and knowledge with future scientists through the Lindau Nobel Laureate Meetings. Through these interactions, he is able to mentor young scientists and nurture a spirit of inquiry and deep curiosity.

According to Wikipedia, Werner Arber is a Swiss microbiologist and geneticist. Along with American researchers Hamilton Smith and Daniel Nathans, Werner Arber shared the 1978 Nobel Prize in Physiology or Medicine for the discovery of restriction endonucleases. Their work would lead to the development of recombinant DNA technology.

Other Resources About Werner Arber

What Schools Are Affiliated With Werner Arber?

Werner Arber is affiliated with the following schools: