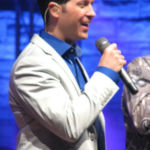 Why Is Wes Hampton Influential?

According to Wikipedia, Wesley Adam Hampton is a Christian music singer. He is a tenor for The Gaither Vocal Band. Hampton sang first tenor for the group from 2005 to 2009, then when it went from a quartet to a quintet, he became the second tenor. He also performs solo concerts. His first solo album was titled "A Man Like Me." Wes also appears and performs in the Gaither Homecoming video concert series, television series and cruises.

Other Resources About Wes Hampton

What Schools Are Affiliated With Wes Hampton?

Wes Hampton is affiliated with the following schools: