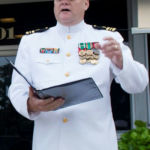 Why Is Wes Modder Influential?

According to Wikipedia, Wesley James "Wes" Modder was an American retired United States Marine Corps officer and military chaplain in the United States Navy. Modder was also occasionally an author in ETHOS, a US Navy newsletter.

Other Resources About Wes Modder

What Schools Are Affiliated With Wes Modder?

Wes Modder is affiliated with the following schools: