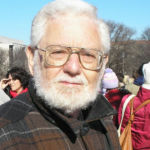 Why Is William Blum Influential?

According to Wikipedia, William Henry Blum was an American author and critic of United States foreign policy. He lived in Washington, DC. Early life Blum was born at Beth Moses Hospital in Borough Park, Brooklyn, to Ruth and Isidore Blum, who were Polish Jewish immigrants. His father was a machinist. He was a graduate of Erasmus Hall High School and gained a degree in accountancy in 1955 from the City College School of Business and Civic Administration, which later became Baruch College of the City University of New York. Blum worked as a computer programmer for IBM and later the U.S. State Department. He had the ambition of becoming a foreign service officer to, as he explained, "take part in the great anti-Communist crusade" but was later disillusioned by the Vietnam War. Blum became involved in anti–Vietnam War activism and was pressured to resign his government post in 1967. By then he had already taken part in anti-war protests and become a founder and editor of the Washington Free Press, an alternative bi-weekly newspaper.

Other Resources About William Blum

What Schools Are Affiliated With William Blum?

William Blum is affiliated with the following schools:

What Are William Blum's Academic Contributions?

William Blum has made the following academic contributions: