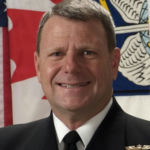 Why Is William E. Gortney Influential?

According to Wikipedia, William Evans "Bill" Gortney is a retired United States Navy admiral who served as the sixth commander of United States Northern Command and the 23rd commander of North American Aerospace Defense Command . He previously served as the Commander, United States Fleet Forces Command from September 14, 2012 to December 2014 and Director of the Joint Staff from July 1, 2010 to August 2012. Prior to that, he served as Commander, U.S. Naval Forces Central Command/5th Fleet. He assumed his post as CDRUSNORTHCOM and commander of NORAD on December 5, 2014, and was succeeded by General Lori Robinson on May 13, 2016.

Other Resources About William E. Gortney

What Schools Are Affiliated With William E. Gortney?

William E. Gortney is affiliated with the following schools: