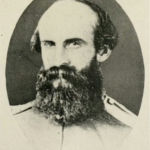 Why Is William E. Jones Influential?

According to Wikipedia, William Edmondson "Grumble" Jones was a Confederate cavalry general with a reputation for being a martinet to his troopers and fractious toward superiors, but acknowledged to be a good commander. After disagreements of a personal nature with J.E.B. Stuart, Jones's brigade was set to guarding supply lines and unavailable during a crucial juncture of the Gettysburg Campaign when Lee suffered from a lack of capable reconnaissance cavalry. As the personality clash between Jones and Stuart escalated, Jones faced charges for impertinence, and was transferred to separate him from Stuart. Jones was killed leading a counter-attack in the 1864 Battle of Piedmont.

Other Resources About William E. Jones

What Schools Are Affiliated With William E. Jones ?

William E. Jones is affiliated with the following schools: