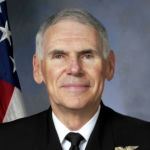 Why Is William J. Fallon Influential?

According to Wikipedia, William Joseph Fallon is a retired United States Navy four-star admiral who retired after serving for over 41 years. His last military assignment was as Commander, U.S. Central Command from March 2007 to March 2008. ADM Fallon was the first Navy officer to hold that position. His other four-star assignments include Commander, U.S. Pacific Command from February 2005 to March 2007, Commander, U.S. Fleet Forces Command from October 2003 to February 2005, and 31st Vice Chief of Naval Operations from October 2000 to August 2003. On March 11, 2008, he announced his resignation from CENTCOM and retirement from active duty, citing administrative complications caused in part by an article in Esquire Magazine, which described him as the only thing standing between the Bush Administration and war with Iran.

Other Resources About William J. Fallon

What Schools Are Affiliated With William J. Fallon?

William J. Fallon is affiliated with the following schools: