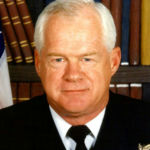 According to Wikipedia, Admiral William John Flanagan Jr. is a retired United States Navy four star admiral who served as Commander in Chief, United States Atlantic Fleet from 1994 to 1996. Early life and education Flanagan was born in 1943 in Jesup, Georgia. In addition to his bachelor's degree in marine transportation, Flanagan received a Master of Arts degree in political science from the American University in 1974 and graduated from Harvard Business School in 1980.

What Schools Are Affiliated With William J. Flanagan Jr.?

William J. Flanagan Jr. is affiliated with the following schools: