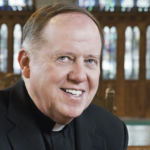 Why Is William P. Leahy Influential?

According to Wikipedia, William P. Leahy is the 25th President of Boston College, a post he has held since 1996, making him the longest serving president in the school's history as of July 31, 2020. He was born in Omaha, Nebraska and raised in Imogene, Iowa. He joined the Society of Jesus in 1967, and is a member of the Jesuits' Midwest Province. Leahy earned a bachelor's degree in philosophy and a master's degree in United States history at Saint Louis University in 1972 and 1975, respectively. He then began studies at the Jesuit School of Theology at Berkeley in Berkeley, California, where he earned degrees in theology and historical theology . He was ordained a priest in 1978. He received a doctoral degree in U.S. history from Stanford University in 1986.

Other Resources About William P. Leahy

What Schools Are Affiliated With William P. Leahy?

William P. Leahy is affiliated with the following schools: