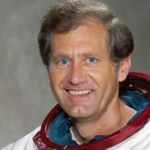 Why Is William Pogue Influential?

According to Wikipedia, William Reid Pogue was an American astronaut and pilot who served in the United States Air Force as a fighter pilot and test pilot, and reached the rank of colonel. He was also a teacher, public speaker and author.

Other Resources About William Pogue

What Schools Are Affiliated With William Pogue?

William Pogue is affiliated with the following schools: