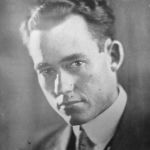 Why Is William A. Scroggs Influential?

According to Wikipedia, William Alexander Scroggs , born in Stillwater, Oklahoma, was an insurance agent and Founder of Kappa Kappa Psi, National Honorary Band Fraternity. He was a commerce and marketing student at Oklahoma A&M College in the class of 1922, and was a cornet player in the A&M band.

Other Resources About William A. Scroggs

What Schools Are Affiliated With William A. Scroggs?

William A. Scroggs is affiliated with the following schools: