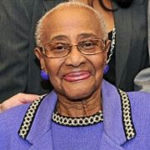 Why Is Willie Barrow Influential?

According to Wikipedia, Willie Beatrice Barrow was an American civil rights activist and minister. Barrow was the co-founder of Operation PUSH, which was named Operation Breadbasket at the time of its creation alongside Rev. Jesse Jackson. In 1984, Barrow became the first woman executive director of a civil rights organization, serving as Push's CEO. Barrow was the godmother of President Barack Obama.

Other Resources About Willie Barrow

What Schools Are Affiliated With Willie Barrow?

Willie Barrow is affiliated with the following schools: