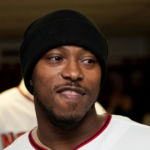 Baseball player from the United States

Why Is Willie Harris Influential?

According to Wikipedia, William Charles Harris is an American professional baseball coach who is currently the third base coach for the Chicago Cubs of Major League Baseball . He is also a former Major League Baseball outfielder and second baseman with the Baltimore Orioles, Chicago White Sox, Boston Red Sox, Atlanta Braves, Washington Nationals, New York Mets and the Cincinnati Reds between 2001 and 2012. With the White Sox, he won the 2005 World Series against the Houston Astros. He batted left-handed and threw right-handed. He attended Middle Georgia State University and Kennesaw State University and lives in Cairo, Georgia during the off-season. He is the nephew of former third baseman and shortstop for the Milwaukee Brewers and San Francisco Giants, Ernest Riles.

Other Resources About Willie Harris

What Schools Are Affiliated With Willie Harris?

Willie Harris is affiliated with the following schools: