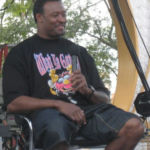 Why Is Willie McGinest Influential?

According to Wikipedia, William Lee McGinest Jr. is a former American football linebacker who played in the National Football League for 15 seasons, primarily with the New England Patriots. He played college football at USC and was selected fourth overall by the Patriots in the 1994 NFL Draft. During his 12 seasons with the team, he was named to two Pro Bowls and won three Super Bowl titles. McGinest also holds the postseason record for sacks. For his accomplishments in New England, he was inducted to the Patriots Hall of Fame in 2015.

Other Resources About Willie McGinest