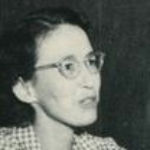 Why Is Winifred Asprey Influential?

According to Wikipedia, Winifred "Tim" Alice Asprey was an American mathematician and computer scientist. She was one of only around 200 women to earn PhDs in mathematics from American universities during the 1940s, a period of women's underrepresentation in mathematics at this level. She was involved in developing the close contact between Vassar College and IBM that led to the establishment of the first computer science lab at Vassar.

Other Resources About Winifred Asprey

What Schools Are Affiliated With Winifred Asprey?

Winifred Asprey is affiliated with the following schools: