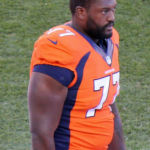 Why Is Winston Justice Influential?

According to Wikipedia, Winston Frederick Justice is a former American football offensive tackle. He was drafted by the Philadelphia Eagles in the second round of the 2006 NFL Draft. He played college football at USC. Currently, Winston Justice is a vice president based in Bernstein's Nashville headquarters, serving as an asset manager to multigenerational families, entrepreneurs, and nonprofits. Prior to joining Bernstein in 2019, he was a portfolio manager for PIA's Alternative Investments Group. Earlier, he co-founded MJC Capital, an early-stage investment vehicle, and also served as a portfolio manager for Wells Fargo Securities.

Other Resources About Winston Justice

What Schools Are Affiliated With Winston Justice?

Winston Justice is affiliated with the following schools: