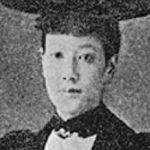 Japanese socialite, first Japanese female college student studied in the US, advocate of education for licensed medical nurse and higher education for girls in 1900s Japan

According to Wikipedia, Princess Ōyama Sutematsu, born Yamakawa Sakiko, was a prominent figure in the Meiji era, and the first Japanese woman to receive a college degree. She was born into a traditional samurai household which supported the Tokugawa shogunate during the Boshin War. As a child, she survived the monthlong siege known as the Battle of Aizu in 1868, and lived briefly as a refugee.