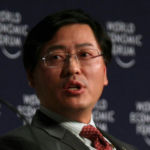 Why Is Yang Yuanqing Influential?

According to Wikipedia, Yang Yuanqing is a Chinese business executive and philanthropist who is the current chairman and CEO of Lenovo. Early life and education Yang was born on 12 November 1964 to parents both educated as surgeons. He spent his childhood in Hefei in Anhui province. He grew up poor, as his parents were paid the same salaries as manual laborers. Yang's parents endured repeated persecution during the Cultural Revolution. Yang's father, Yang Furong, was a disciplined man with strict standards. Yang said of his father, "If he set a target, no matter what happened, he wanted to reach it."

Other Resources About Yang Yuanqing

What Schools Are Affiliated With Yang Yuanqing?

Yang Yuanqing is affiliated with the following schools: