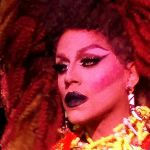 Why Is Yara Sofia Influential?

According to Wikipedia, Yara Sofia is the stage name of Gabriel Burgos Ortiz , a Puerto Rican drag queen, professional make-up artist, and reality television personality. She is most known for appearing on RuPaul's Drag Race season 3, where she won Miss Congeniality, and All Stars season 1, where she was partnered with Alexis Mateo. In 2021, Sofia returned to compete on All Stars season 6. In June 2021, she released "Jiggle!", her debut single.

Other Resources About Yara Sofia

What Schools Are Affiliated With Yara Sofia?

Yara Sofia is affiliated with the following schools: