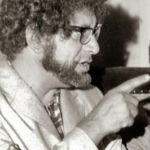 Why Is Zoubeir Turki Influential?

According to Wikipedia, Zoubeir Turki was a Tunisian painter and sculptor of Turkish origin. He was the younger brother of Hedi Turki . Born in the Medina of Tunis to a family of Turkish origin, Turki studied at the University of Ez-Zitouna and the Institute for Advanced Studies, while taking classes at the Tunis Institute of Fine Arts in Tunis. In 1946, he held a position in the administration before being recruited by French schools to teach Arabic. In 1952, he was forced into exile for having participated in the actions of the Tunisian nationalist movement Neo-Destour. He settled in Sweden, from 1953 to 1958, where he joined the Academy of Fine Arts in Stockholm.

Other Resources About Zoubeir Turki

What Schools Are Affiliated With Zoubeir Turki?

Zoubeir Turki is affiliated with the following schools: