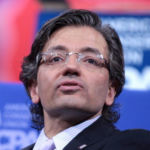 Why Is Zuhdi Jasser Influential?

According to Wikipedia, Zuhdi Jasser, also known as M. Zuhdi Jasser, and Mohamed Zuhdi Jasser is an American religious and political commentator and medical doctor specializing in internal medicine and nuclear cardiology in Phoenix, Arizona. Jasser is a former lieutenant commander in the United States Navy, where he served as staff internist in the Office of the Attending Physician of the United States Congress. In 2003, with a group of American Muslims, Jasser founded the American Islamic Forum for Democracy based in Phoenix, Arizona, and in 2004 he was one of the founders of the Center for Islamic Pluralism.

Other Resources About Zuhdi Jasser

What Schools Are Affiliated With Zuhdi Jasser?

Zuhdi Jasser is affiliated with the following schools: