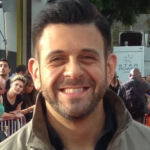 Why Is Adam Richman Influential?

According to Wikipedia, Adam Montgomery Richman is an American actor, television personality, and author. He has hosted various dining and eating-challenge programs on the Travel Channel and History Channel. Early life and education Richman, an only child, was born into a Jewish family in Brooklyn, New York, and raised in the Sheepshead Bay neighborhood of the borough. He attended "a Solomon Schechter school through eighth grade and then a Talmud Torah high school", ultimately graduating from Midwood High School. He completed his undergraduate degree in international studies at Emory University, and earned a master's degree from the Yale School of Drama. While attending Emory University, Richman was a member of Alpha Epsilon Pi fraternity.

Other Resources About Adam Richman

What Schools Are Affiliated With Adam Richman?

Adam Richman is affiliated with the following schools: