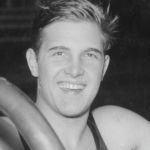 Why Is Adolph Kiefer Influential?

According to Wikipedia, Adolph Gustav Kiefer was an American competition swimmer, Olympic competitor, the last surviving gold medalist of the 1936 Summer Olympics and former world record-holder. He was the first man in the world to swim the 100-yard backstroke in under one minute. Kiefer was also an inventor and innovator of new products related to aquatics competition.

Other Resources About Adolph Kiefer

What Schools Are Affiliated With Adolph Kiefer?

Adolph Kiefer is affiliated with the following schools: