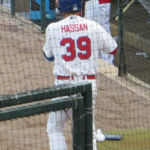 Why Is Alex Hassan Influential?

According to Wikipedia, Alexander Edward Hassan is an American former Major League Baseball outfielder who played for the Boston Red Sox in 2014. Amateur career A native of Quincy, Massachusetts, Hassan attended Boston College High School and Duke University. A two-way player in college, he posted a .342 average with three home runs and 39 runs batted in as a junior at Duke in 2009. He also led the team with 56 runs scored, while going 2-2 with a 4.10 earned run average and a team-leading eight saves in 16 games pitched. In 2008 and 2009, he played collegiate summer baseball with the Orleans Firebirds of the Cape Cod Baseball League and was named a league all-star in 2009. He was selected by the Boston Red Sox in the 20th round of the 2009 draft.

Other Resources About Alex Hassan