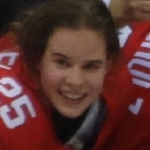 Why Is Alina Müller Influential?

According to Wikipedia, Alina Müller is a Swiss ice hockey forward for the Northeastern Huskies and the Switzerland women's national ice hockey team. At the age of 15, she became the youngest ice hockey player ever to win an Olympic medal, scoring the game-winning goal for Switzerland in the bronze medal game at the 2014 Winter Olympics.

Other Resources About Alina Müller

What Schools Are Affiliated With Alina Müller?

Alina Müller is affiliated with the following schools: