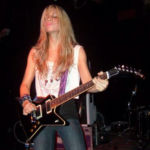 Why Is Allison Robertson Influential?

According to Wikipedia, Allison Rae Robertson is an American musician and the former guitarist for rock bands The Donnas and Chelsea Girls. Early life Allison Robertson was born on August 26, 1979, in North Hollywood, California. She comes from a musical family. Her father is musician Baxter Robertson who wrote the track "Feel The Night" on The Karate Kid soundtrack. Her mother, Lisa Jimenez, worked for A&M Records and for a variety of music publishing companies in Los Angeles prior to the family relocating to Palo Alto in the early 1980s. Although she was born in North Hollywood, she later moved to Palo Alto, California, early in her childhood. She started to play guitar at the age of 12.

Other Resources About Allison Robertson