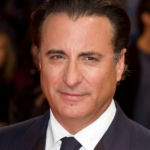 Why Is Andy García Influential?

According to Wikipedia, Andrés Arturo García Menéndez is an American actor and director. He first rose to prominence acting in Brian De Palma's The Untouchables alongside Kevin Costner, Sean Connery, and Robert De Niro. He continued to act in films such as Stand and Deliver , and Internal Affairs . He then starred in Francis Ford Coppola's The Godfather Part III as Vincent Mancini alongside Al Pacino, Diane Keaton, and Eli Wallach. He received an Academy Award nomination for Best Supporting Actor for his performance.

Other Resources About Andy García

What Schools Are Affiliated With Andy García?

Andy García is affiliated with the following schools: