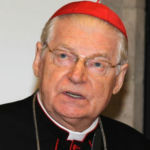 Cardinal of the Catholic Church and Archbishop Emeritus of Milan

Why Is Angelo Scola Influential?

According to Wikipedia, Angelo Scola is an Italian Cardinal of the Catholic Church, philosopher and theologian. He was Archbishop of Milan from 2011 to 2017. He had served as Patriarch of Venice from 2002 to 2011. He has been a cardinal since 2003 and a bishop since 1991.

Other Resources About Angelo Scola

What Schools Are Affiliated With Angelo Scola?

Angelo Scola is affiliated with the following schools: