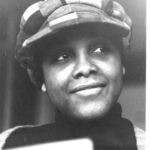 Why Is Anne Moody Influential?

According to Wikipedia, Anne Moody was an American author who wrote about her experiences growing up poor and black in rural Mississippi, and her involvement in the Civil Rights Movement through the NAACP, CORE and SNCC. Moody began fighting racism and segregation as a young girl growing up in Centreville, Mississippi, and continued doing so throughout her adult life across the American South.

Other Resources About Anne Moody

What Schools Are Affiliated With Anne Moody?

Anne Moody is affiliated with the following schools:

What Are Anne Moody's Academic Contributions?

Anne Moody has made the following academic contributions: