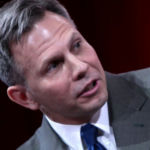 Why Is Anthony Shaffer Influential?

According to Wikipedia, Anthony Shaffer is a former U.S. Army Reserve lieutenant colonel who became known for his claims about mishandled intelligence before the September 11 attacks, and for the censoring of his ghost written book Operation Dark Heart. Shaffer enlisted in the Ohio Army National Guard in 1980 and graduated from Officer Candidate School in 1982.

Other Resources About Anthony Shaffer

What Schools Are Affiliated With Anthony Shaffer ?

Anthony Shaffer is affiliated with the following schools: