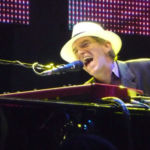 Why Is Benmont Tench Influential?

According to Wikipedia, Benjamin Montmorency "Benmont" Tench III is an American musician and singer, and a founding member of Tom Petty and the Heartbreakers. Early years Tench was born in Gainesville, Florida, the second child of Benjamin Montmorency Tench Jr. and Mary Catherine McInnis Tench. His father was born and raised in the city of Gainesville, and served as a circuit court judge.

Other Resources About Benmont Tench

What Schools Are Affiliated With Benmont Tench?

Benmont Tench is affiliated with the following schools: