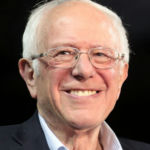 Why Is Bernie Sanders Influential?

According to Wikipedia, Bernard Sanders is an American politician and activist who has served as the junior United States senator from Vermont since 2007. He was the U.S. representative for the state's at-large congressional district from 1991 to 2007. Sanders is the longest-serving independent in U.S. congressional history. He has a close relationship with the Democratic Party, having caucused with House and Senate Democrats for most of his congressional career. Sanders unsuccessfully sought the Democratic Party nomination for president of the United States in 2016 and 2020, finishing in second place in both campaigns. Before his election to Congress, he was mayor of Burlington, Vermont.

Other Resources About Bernie Sanders

What Schools Are Affiliated With Bernie Sanders?

Bernie Sanders is affiliated with the following schools:

What Are Bernie Sanders's Academic Contributions?

Bernie Sanders has made the following academic contributions: