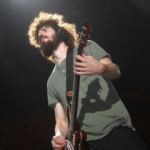 Why Is Brad Delson Influential?

According to Wikipedia, Bradford Phillip Delson is an American musician, best known as the lead guitarist and one of the founding members of the rock band Linkin Park. Early life Brad Delson attended Agoura High School in Agoura Hills, an affluent suburb of Los Angeles, with childhood friend and Linkin Park bandmate Mike Shinoda. He played in various bands throughout his high school career, the most notable being Relative Degree, in which he met and teamed up with drummer Rob Bourdon. Relative Degree's goal was simply to play a show and after achieving that goal, they disbanded.

Other Resources About Brad Delson

What Schools Are Affiliated With Brad Delson?

Brad Delson is affiliated with the following schools: