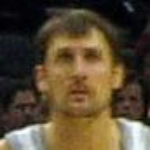 Why Is Brent Barry Influential?

According to Wikipedia, Brent Robert Barry , also known by the nickname "Bones", is an American basketball executive, broadcaster and former player. He is the current vice president of basketball operations for the San Antonio Spurs. The shooting guard played professionally in the National Basketball Association , winning two league championships with the Spurs in 2005 and 2007, and also won the Slam Dunk Contest in 1996. He is the son of former NBA player Rick Barry.

Other Resources About Brent Barry

What Schools Are Affiliated With Brent Barry?

Brent Barry is affiliated with the following schools: