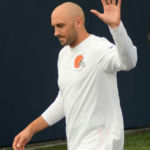 Why Is Brian Hoyer Influential?

According to Wikipedia, Axel Edward Brian Hoyer is an American football quarterback for the New England Patriots of the National Football League . Since joining the NFL in 2009 as an undrafted free agent, he has started for eight different teams, the second-most in league history. Hoyer has also spent six non-consecutive seasons as a backup on the Patriots and was part of the team that won a Super Bowl title in Super Bowl LIII.

Other Resources About Brian Hoyer

What Schools Are Affiliated With Brian Hoyer?

Brian Hoyer is affiliated with the following schools: