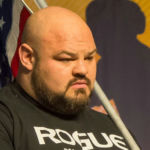 Why Is Brian Shaw Influential?

According to Wikipedia, Brian Shaw is an American professional strongman competitor and winner of the 2011, 2013, 2015, and 2016 World's Strongest Man competitions. In 2011, he became the first man to win the Arnold Strongman Classic and the World's Strongest Man contests in the same calendar year, a feat he replicated in 2015. With 26 international competition wins, he's the fourth most decorated strongman in history behind Žydrūnas Savickas, Mariusz Pudzianowski and Hafþór Júlíus Björnsson.

Other Resources About Brian Shaw

What Schools Are Affiliated With Brian Shaw ?

Brian Shaw is affiliated with the following schools: