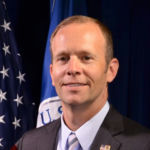 Why Is Brock Long Influential?

According to Wikipedia, William Brockmann Long is an American emergency manager who served as the Administrator of the Federal Emergency Management Agency . He was appointed to the position by President Donald Trump in April 2017 and confirmed by the United States Senate in June 2017. He served until his resignation in March 2019, following criticism of his handling of the Hurricane Maria and an ethical complaint over using official vehicles.

Other Resources About Brock Long

What Schools Are Affiliated With Brock Long?

Brock Long is affiliated with the following schools: